Grumpy Dragon at RavenCon 2015, Part I

I couldn’t pass on getting a picture of this cosplay of Karou from Laini Taylor’s novel Daughter of Smoke and Bone.

I’m not sure what Windsor did to provoke Karou, but I’m just glad she didn’t take any of his teeth.

I don’t think Captain America is gonna be happy about this when he sees it. Lucky dragon! 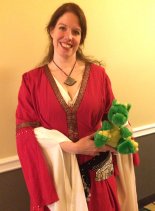 Hey… she looks familiar… even if she isn’t kissing Windsor this time.

Loved this genderbend on Hawkeye. My favorite details are all the band-aids (she says people kept asking if she’d been beaten up) and the portable word balloon. 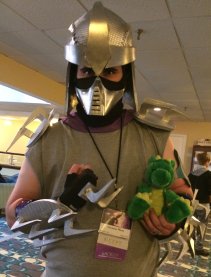 Windsor got to hang with Shredder, the nemesis of the Teenage Mutant Ninja Turtles. Given Windsor doesn’t like TMNT, he seemed somewhat okay with Shredder.

These two ladies were rockin’ the Steampunk. Even Windsor approves.

This rather freaky cosplay has me stumped. My son’s theory is that it’s the Wizard of Oz. I told him he’s nuts, but now I think he might be right. 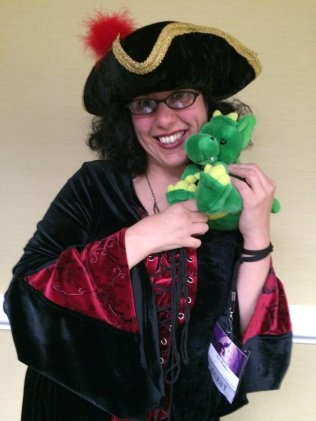 I’ll post some more pics tomorrow of Windsor, the Grumpy Dragon, at this year’s RavenCon. There are lots of cool costumes I can’t wait to share with you.

Bill Blume discovered his love for the written word while in high school and has been writing ever since. His latest book Gidion's Blood is being released on August 11th by Diversion Books. His short stories have been in many fantasy anthologies and various ezines. Just like the father figure in his first novel, Bill works as a 911 dispatcher for Henrico County Police and has done so for more than a decade. He also served as the 2013 chair for James River Writers in Richmond, which produces one of the nation’s best annual conferences for educating and connecting writers.
View all posts by Bill Blume →
Gallery | This entry was posted in Out in the World and tagged Agent Anita, Agent Carter, Agent Peggy Carter, Anita Bruckert, brains, Captain America, cosplay, cosplayer, cosplayers, Daughter of Smoke and Bone, Days of Blood and Starlight, Dorothy, dragon, Dreams of Gods and Monsters, Genesis Moon, grumpy dragon, heart, K.T. Pinto, Karou, kiss, kisses, KT Pinto, Lady Ozma, Laini Taylor, magic wand, Ozma Ireton, Peggy Carter, pirate, Rainbow Brite, RavenCon, RavenCon 2015, Shredder, smooch, steampunk, stethoscope, Steve Rogers, Susan Zee, Wicked Witch, Wicked Witch of the West, Windsor, witch, Wizard of Oz. Bookmark the permalink.

2 Responses to Grumpy Dragon at RavenCon 2015, Part I